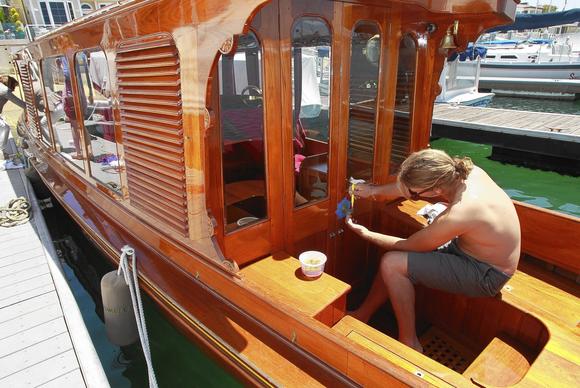 Daily Pilot: Victoria Fash’s 1902 English Gentleman’s Launch all wooden boat is cleaned up for Saturday’s wooden boat festival at the Balboa Yacht Club in Newport Beach. A worker cleans the all brass handles after a varnish was put on the mahogany wood over the last week. (Don Leach, Daily Pilot / June 5, 2014)

Owner of 112-year-old vessel that has had many lives expects it to shine at inaugural wooden boat festival.

back to the United States, she planned to sell all seven of her antique

But when the time came to leave Britain, there was one vessel she just couldn’t part

with, the one named Humble, a wooden, electric boat built more than 100 years

“I loved them all dearly,” she said of the fleet. “When I got to this one, I couldn’t do

it.… I just couldn’t leave her with somebody else.”

And so Fash, a former chief executive with IMS Health, a global information and

technology services company, arranged for Humble to travel on a freighter to San

Francisco, then on a semi-truck to Newport Beach, where the boat is now tethered

It usually sits under a cover, but Saturday, roughly a year after its journey, Humble will

be shown publicly in its new home city for the first time.

Yacht Club, and Humble will be among them. With a rich history and a passionate

owner, it may very well be in the running for best in show.

“Anybody, whether you love boats or don’t, is going to get blown away by seeing

what is here,” said Ralph Rodheim, the show’s organizer. “You can’t describe it. The

designs, the colors, the varnish, the majesty, I don’t have a big enough vocabulary

to tell you how awesome this is.”

It may have cost a “bloody fortune,” as Fash put it, to bring Humble here, but

organizing and paying for the journey was worth the effort.

Humble was, after all, the best boat in England, said Fash, who has pieced together

much of the boat’s rich history.

Built in 1902 by an unknown ship maker in the Broads, Humble was acquired early on

by George, Prince of Wales, who took her on a tour of Europe.

The British navy commandeered her for use during World War II, outfitting the vessel

— named Able at that time — with hydraulic pumps and a steam engine. As such,

In the late 1950s, two brothers turned the boat into a passenger ferry, installing

cheap chairs and a tacky umbrella. They shuttled up to 50 people at a time along

the River Thames, from Windsor to London, until the mid-1960s.

Then the boat, renamed for the brothers’ grandmother, fell on hard times, Fash said.

Her keel started to rot — at least until a wealthy owner came along to save her.

Using as a reference what Fash called the only other boat of its kind, known as a

gentleman’s launch, which sits in a museum in London, this owner remade her to

look exactly as she should, Fash said.

By the time Fash discovered Humble, in 2002, it had been through a host of new

owners and again fallen into disrepair.

The 52-foot boat was a wreck, kept from sinking only by the strap of a crane, which

a boatyard owner had kindly slung underneath. The tip of the boat was under the

water. The floorboards had been taken out. Its appearance was dulled.

But when Fash saw the beautiful shape of the bow, she was convinced: The boat

had to be saved.

“It’s a beautiful, unique piece of floating history,” she said. “I thought, ‘Well, it’s only

money. You’ll do something that lasts forever if you take care of it.'”

Fash bought the boat for about $120,000. Its restoration took two years, but soon she

was taking it out on the water for parties, filling the boat with up to 150 people for a

cruise or seating 22 around the dining table for dinner.

The English took to calling the now-shining vessel “Not So” as in “Not So Humble.”

Humble arrived in Newport Beach roughly a year ago, again in need of some work.

Its British electric charging system did not work in the U.S. and had to be replaced.

The original mahogany wood also needed to be varnished.

As Fash puts it, “She was such a mess from the trip, poor dear.”

arm, Fash remarked that the boat is now in top shape.

Humble was washed last week, and a team had been polishing its many brass

sparkled and the monogrammed champagne flutes hung at the ready.

Inside Fash’s home, one of her antique clocks was being worked on too. Since

buying Humble, she has developed a love for old things, she said.

For the show, she bought a new Victorian-era outfit — a rich purple dress, white

parasol and gloves, round hat and purple shoes — as she does for every boat show

she enters. (Wearing the same outfit twice would be tacky, she said.)

Near the orchids, carnations and roses she has ordered to match the custom-made

burgundy seat cushions and drapes on the boat, a Victrola she owns will be

stationed, as will an antique glass-cut chandelier, both from the appropriate time

Get the News Delivered

Gear up at The Official NBWBF Store for logowear, calendars and more.