Ralph Rodheim is pictured in 2010 as he was named Citizen of the Year by the Newport Beach Chamber of Commerce. Rodheim died Sunday of complications related to ALS. (File photo | Daily Pilot)

Word came today from Newport Beach Chamber of Commerce President and CEO Steve Rosansky that 2010 Citizen of the Year Ralph Rodheim passed away over the weekend. He was 73.

Ralph had been battling ALS (Lou Gehrig’s Disease) for the past several years, and although he had been getting around in a motorized wheelchair, Rosansky noted that Ralph continued to be an active part of the community.

“Ralph partook in Chamber and Civic activities up until the end,” said Rosansky in an email. “Ralph was generous not only with his money, but more importantly, with his time. Ralph was very active over the years in Balboa Village and served with distinction as President of the Balboa Village BID and its successor, the Balboa Village Merchants Association. Ralph and his wife Penny owned and operated Balboa Boat Rentals on the waterfront in the Fun Zone for over 25 years.”

Rosansky noted that Ralph became a Commodore in 1986 and served as Skipper of the Commodores during the 1997/1998 term.  He was also named Citizen of the Year by the Newport Beach Chamber of Commerce in 2010.

Ralph participated in a high-profile Ice Bucket Challenge several years ago when he first announced he was in the early stages of ALS. 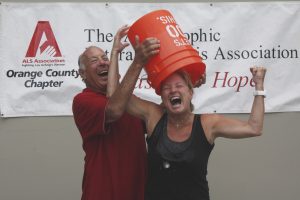 This reporter corresponded with Ralph last week when he sent me information about an ALS-related event taking place at the Balboa Bay Club on Feb. 27 that will talk about a promising new treatment for ALS. Augie Nieto, Chief Inspiration Officer for Augie’s Quest to Cure ALS, and the Chairman of the Board for the ALS Therapy Development Institute, will be attending the seminar, as well as Steve Perrin, PhD, who said that “this is the most effective treatment ever tested at the ALS Therapy Development Institute.”Contact gsimoneaux@als.net for more details on the seminar.

Funeral arrangements for Ralph have not yet been announced.

Get the News Delivered

Gear up at The Official NBWBF Store for logowear, calendars and more.